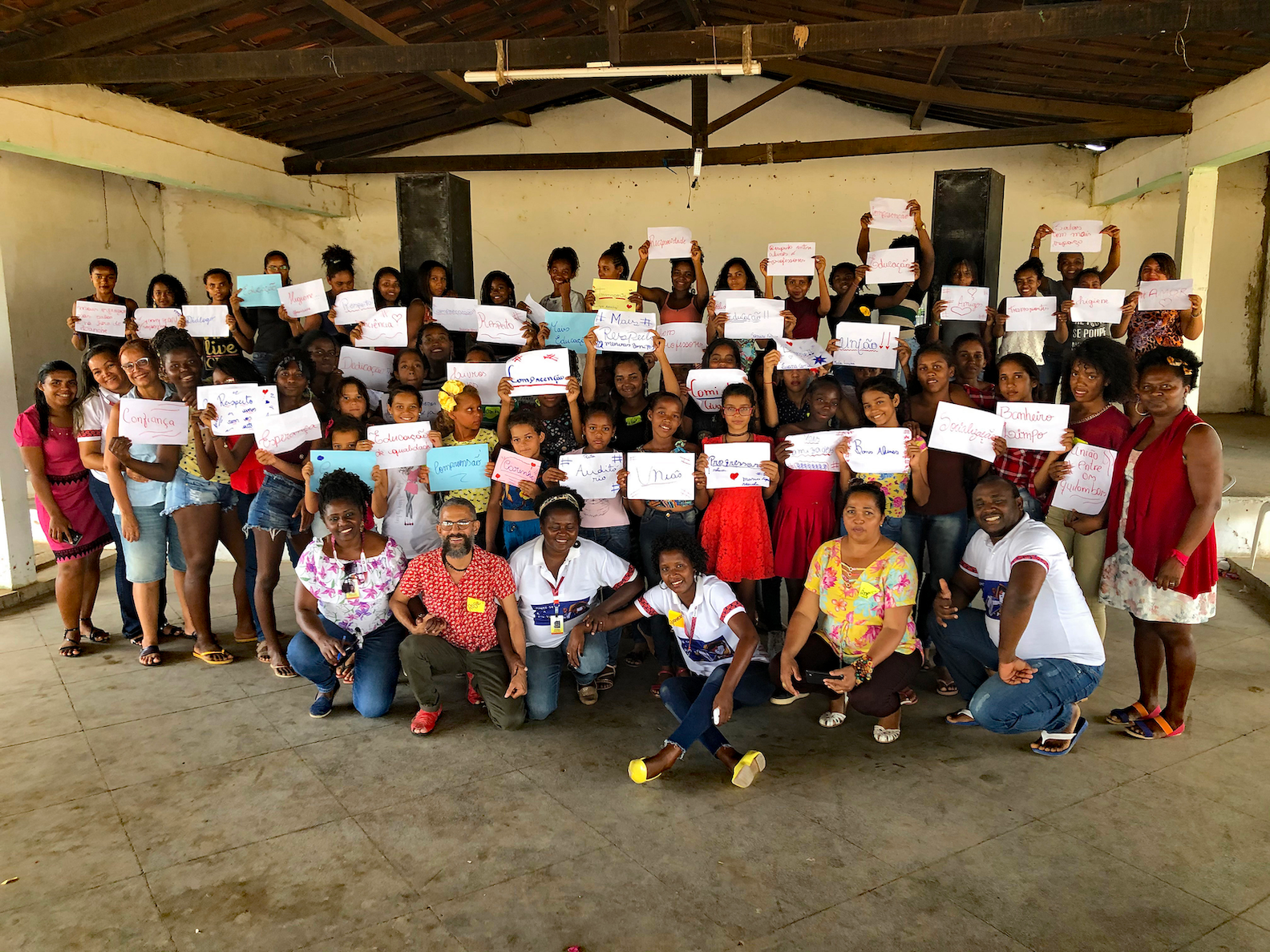 There are over one million girls out of school in Brazil today — and quilombola (descendants of Africans brought to Brazil as enslaved laborers) girls are among the most likely to experience barriers to their education. “There’s a feeling in quilombo communities that we don’t exist to the rest of the country,” says quilombola educator Maria José de Souza Silva. “That others in Brazil want to erase our history and our knowledge.”

As an advisor for Centro de Cultura Luiz Freire (CCLF), Malala Fund Education Champion Rogério José Barata works to improve quilombola girls’ access to quality, inclusive education in Mirandiba, a municipality in the northeastern state of Pernambuco that is home to the largest number of quilombola communities in its territory. Only four of 15 quilombola communities in Mirandiba have operational schools. With so few options, students must travel long distances or rely on unsafe and inconsistent transportation to access education.

The problems continue when quilombola students get to the classroom. Underfunded schools lack libraries, clean water and internet access. Current curriculums don’t include African and Afro-Brazilian history, failing to address racial inequality in the classroom and preventing quilombola students from learning about their people. “Their education does not positively recognize them as Black quilombolas,” says Rogério. “To fix this, we need implementation of an anti-racist educational policy.”

In 2020, Mirandiba passed The Municipal Curriculum Guidelines for Quilombola School Education — a major advocacy win for Rogério, CCLF and the quilombola community. The new law includes language on how to bring quilombola leaders into decision-making processes and update curriculums and educator training programmes. These guidelines also introduce structural changes to organise schools with culture in mind, ensuring future generations of quilombola students can learn about African and Afro-Brazilian histories and traditions.

I asked Rogério about the importance of contextualised education, his work to ensure these guidelines are implemented and how CCLF is helping quilombola girls learn.

Noreen Plabutong (NP): How do you feel about the passing of these new education guidelines?

Rogério José Barata (RJB): I feel confident that a very important first stage of our commitment with the quilombola communities of Mirandiba has been accomplished. Now they have a law. This gives them more power to defend their right to specific, contextualized and quality quilombola school education.

NP: What are the curriculum guidelines?

RJB: The Municipal Curriculum Guidelines for Quilombola School Education are the result of a historic struggle of the quilombola movement. They guide education systems in redefining and implementing policies that can help overcome social inequalities.

The guidelines are explicit in saying quilombola education should cover all dimensions of Black identities in the country's cultural, political, social and economic context. It offers guidance on how to update coursework, training programs for quilombola teachers and create a democratic school management model, which ensures quilombola communities are part of the decision-making process. This is one more instrument to combat structural and institutional racism practiced against the Black population in Brazil.

NP: To help quilombola girls in Mirandiba learn, what is the most important issue to tackle?

RJB: Structural racism. It manifests itself in socioeconomic and labor relations, in affection and in the discriminatory practices of institutions. It is maintained with the mechanisms of exclusion, annulment, invisibility of ethnic-racial diversity and in such an intentional and systematic way that the population's low self-esteem deepens throughout their life trajectories. This unfolds in the genocide of Black people — mass incarceration, poverty and violence against women.

Girls experience this in their daily lives. They lack opportunities, have few schools in their communities and their education does not positively recognize them as Black quilombolas. To fix this, we need implementation of an anti-racist educational policy.

NP: What next steps will CCLF take to push for implementation of the education guidelines?

RJB: To support the education of quilombola girls, our plan is to negotiate for the municipal and state public management to create the operational, financial and human resources needed to execute an implementation plan. We’ll also work on community organizing and training quilombola youth to advocate for their education.

Through participating in a working group made up of quilombola representatives and municipal officials we hope to see political impact on the public budget. This would help cover the improvement of quilombola schools and hiring and training of teachers [to work with quilombola student populations]. As a media action, we’ll work with girls to produce and circulate content to expand the dissemination of our advocacy messages and mobilize public opinion in defense of improving the quality of quilombola school education.

The other part is working to strengthen the quilombola community’s organizing skills to increase their participation in the implementation of the guidelines. This will involve political training of quilombola leaders and teachers to strengthen their capacity for influence in participatory advocacy actions and preparing communities to participate more in the reformulation of their schools' pedagogical projects through workshops and webinars.

NP: How are quilombola girls and community leaders responding?

RJB: A testimony that is repeated between quilombola leaders and the girls and young women is that: “The victory of the approval of the guidelines shows that we are capable.” Hope is a concept that translates into collective action.

There is a great anticipation to start the implementation phase of the guidelines. Leaders and girls understand it means improving schools in their communities. It means having permanent school transport to go to schools in the urban center. It means having a say in defining what their education should be like. But they are also aware that the journey is not going to be easy.

Implementation of the guidelines, directly and indirectly, affronts the mechanisms of structural racism. It will bring the debate about quilombola rights to the center of public policies and have implications for the local budget. The violation of quilombola rights will no longer be invisible.

This interview has been edited and condensed for clarity.

This article is available in Portuguese.